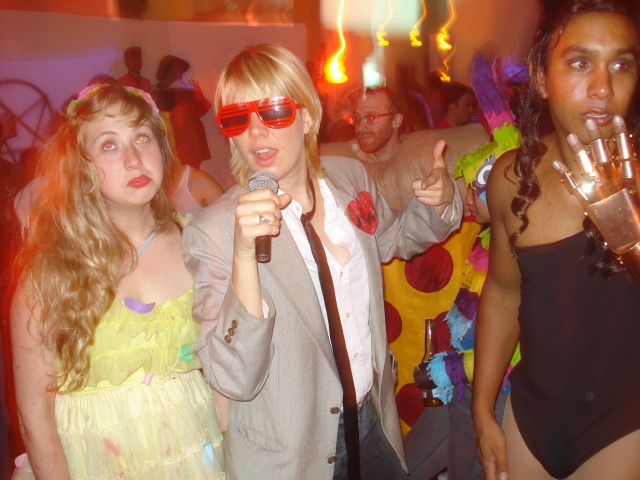 Being Kanye for Halloween felt amazing and very powerful.  The costume came together at the last minute and before that I was thinking of being Ronnie Spector cuz my friend was going as crazy Phil, but that would have meant wearing a dress and heels and I think I would have felt very uncomfortable.  Suit jacket and microphone felt great.  We went to the SFMOMA party on 10.30 and ended up at Lobot on actual Halloween.  I don’t mean to generalize, but I felt like there was definitely a racial gap as to who recognized the Kanye signifiers. And interestingly enough there were more at MOMA in downtown SF than at LOBOT, which is in West Oakland.  I mean, I know the costume wasn’t perfect and I looked kind of New Wave-y, but the sunglasses alone should have given it away.  Which is unfortunate cuz by then I had gotten pretty good at making “Imma let you finish…” jokes on the fly.  BUT at Lobot I did run into a Beyonce and a curly blonde girl who I made pose for a photo-op as Taylor Swift (results above).

A lot of people thought I was Tom Petty, I guess cuz of the heartbreak patch and OK, BECAUSE I AM TALL WHITE AND BLONDE.  (But I am determined not to let those details hold me back in my rapping career.)

I went with my friend Seve who was Frank Sinatra, and Leif, who was a crazy Phil Spector.  I thought we had a slightly incongruous group costume that was kind of pulled together by us all being musical icons from different eras who were all probably misogynist, ego-driven assholes.  It was only at the very end of the night that I realized that oops!  We were accidentally the TRAVELING WILBURYS, the 80s supergroup featuring Tom Petty, Roy Orbison, Bob Dylan, George Harrison and Jeff Lynne.  Seve, with his dapper suit, could easily have been a Roy sans shades and Leif, with his fuzzed out trial-era Spector hair, was actually a ringer for Dylan.  NOOOOO!!!  HOW DID THIS HAPPEN?!?

Although, I must say that the phrase Traveling Wilburys, and all its connotations, is basically the BEST PUNCHLINE EVER, so as a group costume it was actually pretty sweet.