LIL’ B: a rare experience, you feel me?

Fuck this show was so rad!  Or in the words of the young B, “rare”.  I found him to be really sweet actually.  When I first heard his music (Bitch Suck My Dick) I was like, why are we throwing a show for this guy?  But if you dig deeper he’s a pretty complicated fellow in terms of output and intent.  I mean, his favorite band is Antony and the Johnsons.  “Swag OD” with Souljah Boy?  A double LP of beatless ambient rap?

But yeah, the man’s got haters.  When we booked this crazy ex-Motown club in West Oakland for him instead of throwing it at EASTNILE it was because we thought there’d be a crazy crowd showing up.  But after that he kept promising that he’d announce it on his Twitter/Myspace/Blogger but never did.  I think he was genuinely worried about people coming after him. 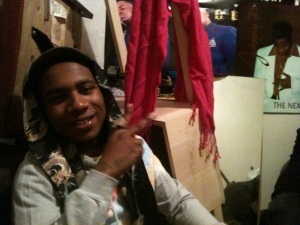 Lil B backstage at the Continental Club

So while that kind of foiled an opportunity for a packed crowd, once he showed up it was hard to be mad at him.  We hung out backstage in a Huey Newton chair and while he kept his sunglasses on, every once in a while an eager wide-eyed innocence would break through.  For one, he seemed genuinely grateful to be there, in a cluttered backstage room that had probably been mostly neglected since the mid-70s.  The word he used most was “blessing”.  Over and over.  How it was a blessing to be here at a “real underground show” with “real blessed artists”.  Then he went out there and gave his best to the small crowd that had driven from all over California to see him.

And right before he did, Lil’B, one of the young internet’s most prolific self-documenters, turned to me, the last person in the dressing room.  He unwrapped a camera out of a plastic Target bag and asked me if I would film him.

How funny that he asked me!  What if I hadn’t been there?  What if I didn’t know how to work a camera?  So while yes, he does obsessively self-document and self-post, it’s hard to accuse him of being calculating.